Beretta’s Ultraleggero is now the lightest steel shotgun on the field.

Complete with a “skeletonized” receiver, OCHP barrels with no side ribbing, and techno-polymer receiver inserts. The receiver featured on the gun itself is based on the Beretta 690 series. The chamber is 3”, and allows for the use of any type of cartridge, 56 grams or under: steel shot, steel shot HP, and lead shot. The trigger plate is made out of aluminum for a lighter gun, and the selector feature allows for the user to choose the barrel for the first shot. The cavity inside the stock of the gun has been increased in further efforts to lightening the gun, subtracting an average of 129 grams compared to other Beretta stocks.

The forend featured on the Ulltraleggero is a newer system, that was adopted by the 694. The forend is also made out of aluminum to reduce the overall weight of the gun. The recoil pad included with this piece is the Extralight recoil pad, and weighs 30% than the standard butt pad. The design of the recoil pad allows for less abrasion, aging to natural elements, as well as be water resistant with its closed-cell structure. The barrels, crafted with tri-alloy steel through the processes of cold hammer forging, deep gun drilling, and special vacuum relieving.

The design is complete with a double 80 mm forcing cone, which provides a noted superior quality performance, as well as solidifying a constantly perfect shot and shot patterns. 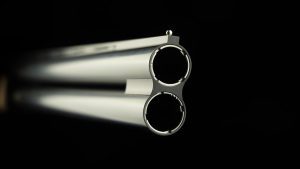 In the design process of this gun, the biggest goal was to make it as light as possible. So in creation of design, all metals deemed non-essential for the design was “carved out” or then replaced with a lighter material as a substitution.

This gun also has the capability to be one of the highest customizable guns currently on the market, allowing users to download and 3D print their own side plates.